You’ve all heard the narrative by now, right? “Marvel is failing because they’re catering to SJW’s.” Even as I type that sentence, I feel encompassed by laziness and mediocrity, because that’s exactly what that statement is, on the most basic level. On a more complex level, it’s just poor analytics and the manifestation of people’s true racist, homophobic, and misogynistic, nature. Still, even with a plethora of high-quality stories surrounding minorities at Marvel, the narrative persists. Maybe if the Marvel Cinematic Universe wasn’t around, this conversation would be different, maybe not. When did it all start though? When did the bigots, racists, and conservatives feel empowered to start hating everything Marvel produced? One could argue for different times, but to me, the biggest sign of the change in comics was when Sam Wilson took over the role of Captain America. 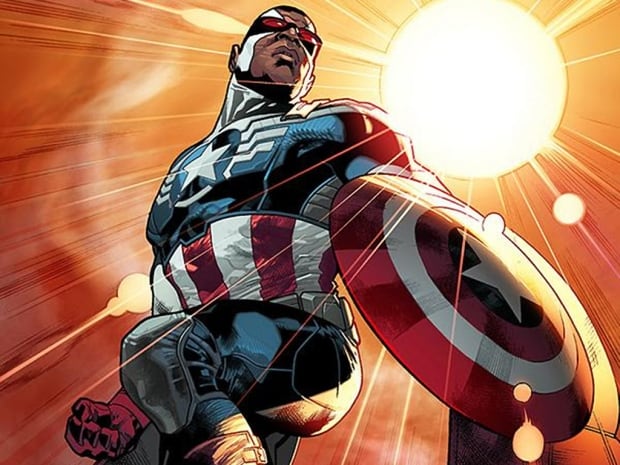 Sam Wilson is the original Falcon. Dear friend to longtime Captain America, Steve Rogers. Steve was going through some things in the comics for a while and Marvel decided it was time for a shake-up. They decided to make Sam the Captain America, and the world went crazy. I even saw the news being talked about on media outlets like CNN and night shows such as the Colbert Show. It created a rift with fans and creators alike. The term SJW wasn’t in people’s brains at the time though, but the hatred for Sam Wilson was there. Fans who had no interest, good or bad, in his character as Falcon, acted as if he needed to be underneath Steve Rogers. So, some time passes, his comics come out and the narrative is still somewhat the same. Except there was one thing that people seemed to be ignoring. Sam Wilson was changing. Writer Nick Spencer put Sam Wilson through some tough times in the couple years or so that he was Cap. All that rage and hate from our world, was channeled into the comic, and it was done well. Sam was dealing with biased news reporters, corrupt cops, and a society that preferred Steve Rogers over everything. Spencer’s run was, to me, symbolism of American’s refusing to accept almost any type of change. Sam idolized Steve like most. He tried his best to emulate Steve in every way, but there were certain things Sam refused to compromise on. A certain part of himself, his individual soul, couldn’t be quiet when something was going on he didn’t agree with. When Steve Rogers showed that side of himself, more often than not, he was met with words such as courage, real American, and patriot. But Sam received words such as divisive, fake, and selfish. You throw all of that on top of the fact that Steve was really a Hydra agent this entire time and it became hard for me to read Sam Wilson comics. He couldn’t catch a break. Steve was setting him up to fail, and it was one of the worst cases of dramatic irony I’ve seen in a while.

Switch over into Secret Empire. Boy, did people have a bunch to say about this topic. While I was never a fan of turning Cap into a Hydra agent, as the story progressed, I couldn’t help but notice themes in this story. Whether Spencer meant for Hydra Cap to represent fascist government, white supremacy, or America is for him to say, but the roles he gave to the “lower” characters blew me away. And I say lower because they are minorities, so in the eyes of your typical bigoted comic fan, they are lower. And who was leading that charge? Sam Wilson. Nothing needed to be done on his part. He could have stayed hidden, broken from a system that took advantage of him, but no, he decided to help save a world that wouldn’t save or help him whether he was Sam Wilson or Captain America. I couldn’t help but admire that. This whole long-winded opening is basically to say, Sam Wilson is a changed man. You, the real people have turned on him for stepping up when he was called, and so did the Marvel Universe. But, he refuses to let it keep him down, and now we get to where we are today. He’s put down the shield and taken his old title back. Falcon. This time, he’s got a new sidekick too. Rayshaun Lucas was introduced to the world in Secret Empire and has since gone under the tutelage of Sam. This comic is being written by Rodney Barnes. Pencils in this issue were done by Joshua Cassara, and the color artist (who does a fantastic job in this issue) was Rachelle Rosenberg.

The comic starts off and instantly, it puts me in a philosophical mood for some reason. Sam is talking about order, chaos, mankind and what not. He stops a drive by shooting that’s about to take place. He breaks the gangster’s guns, rounds them up, and all is well. I didn’t expect this story to go down the path it did, but Sam Wilson has always focused on real social issues as a hero. He empathizes with the men he had to stop. He realizes the terrible circumstances in which they’ve had to grow up. He says, “This challenge won’t be met with force. My heart must bond with theirs,” talking about the young men he just had to arrest. Not often a hero has that type of range where they are focused on the real rehabilitation of common gangsters. The issue then transitions into Sam talking with the Mayor on television. This bit was funny, but I couldn’t help but feel sad too while reading. The mayor contradicts himself by saying the violence in Chicago, where Sam is now, is on the decline, then says it’s still a very potent, real problem. Politicians, everywhere you look, are contradicting themselves. The Mayor isn’t concerned with anything other than incumbency. He smiles for the cameras, assures the people they’re safe, but Falcon flies away, not allowing him to soak up any more camera time.

We transition next to Rayshaun. A little banter between Sam and Rayshaun goes on for a bit. I like how Barnes handled his character in this issue. His personality didn’t feel forced. Yes, he’s a teenager, so he’s going to say some things that make adult’s roll their eyes, but he’s very mature for his age and that shows as well in this issue.

This issue is revolving around the gang violence in Chicago. Sam wants to get back to his roots and helping people. He’s always done it, just on a “Kang is trying to take over time” sort of way. Sam attempts to diffuse the bomb that is the war between the Rangers and the Kings. Sam attempts to talk to the Rangers, and Rayshaun handles the Kings. The Rangers are predominantly black, while the Kings are Hispanic. The scene of Falcon talking to the leader of the Rangers was great. The leader, Dray, of course is skeptical of anything the Falcon has to say. The way he sees it, Falcon is just a negro-for-hire by the white man. Dray references the real-life murders of Fred Hampton and Laquan Macdonald as to why he has no interest in aligning with Sam. But, his members think otherwise and decide to call a truce with the Kings. Rayshuan ends up getting the Kings to agree as well. This entire scene could be dissected by individuals who study race. I loved how real the dialogue felt. Every race and culture have reasons they don’t get along with one another. Barnes does a good job of scraping the surface of how it is to see two different black men interact. 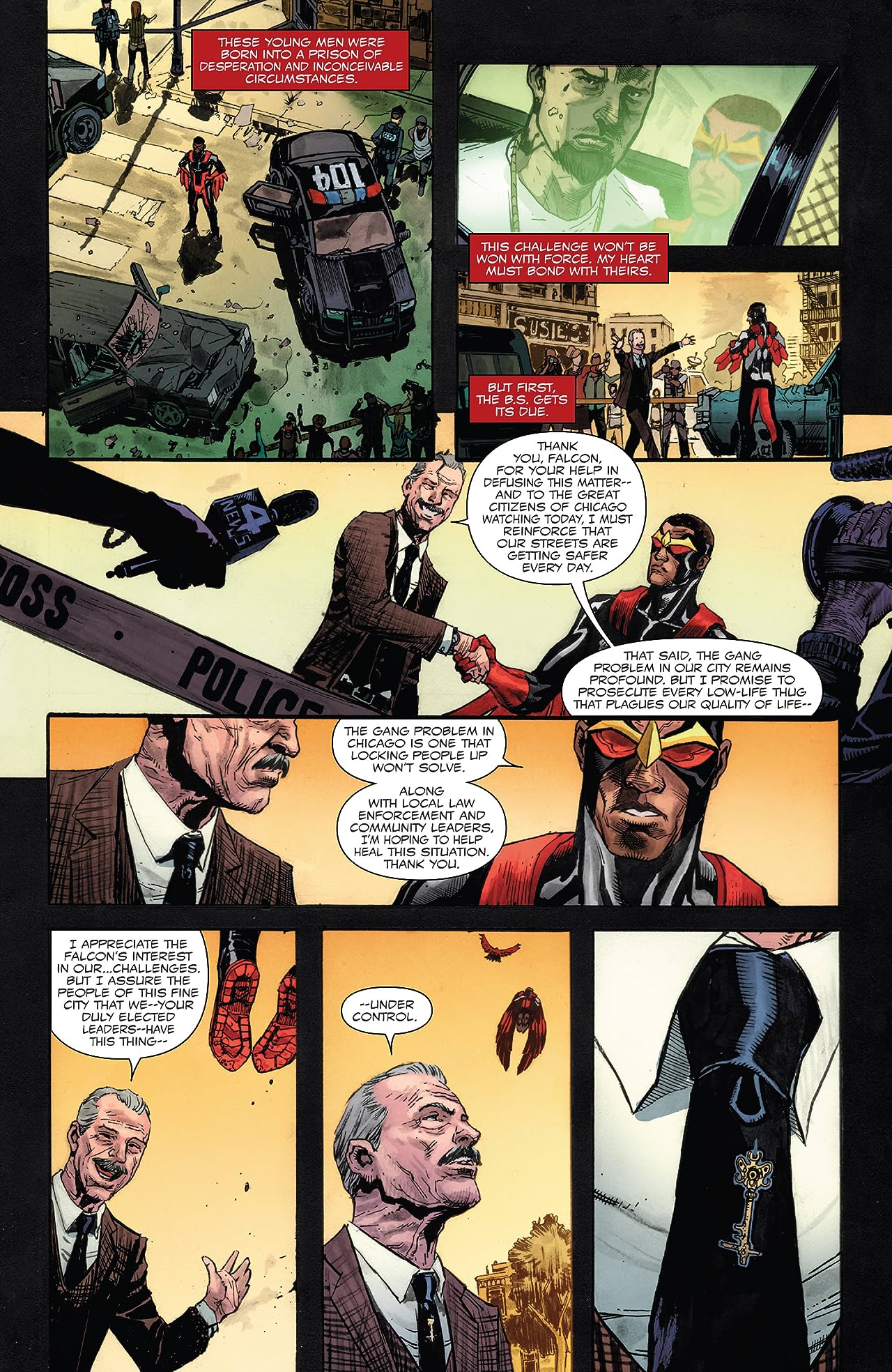 A great bonding moment between teacher and student happens next. You can clearly still feel the pain in Sam Wilson’s voice when he talks about Secret Empire. Rayshaun tries to calm his guilt, but Sam instead tells him a story about how his father used to lie to people, so they’d pay rent on time. He then goes on to talk about his idolization of Steve and the American way of life. He talks about the doubt he has in his heart. Not just of Steve, but America itself, and it all set in when Secret Empire began. Everything he believed was a lie. Rayshaun responds and said something that almost made me cry, applaud, and scream all at the same time. He talks about the influence Sam has had on him. The idea of being a hero never came to him, but when he saw heroes like Sam, Luke Cage, and Black Panther, he felt emboldened to try and do something to help people. He says, “Maybe I can do it.” That right there, is one of the main reasons I love comics and it’s great to see young heroes in comics look up to the same heroes I look up to.

The issue ends on a somber note with the meeting of the two gangs. Sam gives a small speech and asks the two leaders to come up front. Dray, the leader of the Rangers, shoots the leader of the Kings point blank in the head. Chaos ensues. The issue ends with Dray kneeling in front of the “Mayor” who then reveals himself to be the villain known as Blackheart, son of Mephisto.

Don’t let the outlandish ending to this comic fool you. Politicians in these urban cities aren’t doing enough to end the violence. They are content just locking people up and doing nothing about the guns and drugs on the street. They see people as pawns, not human beings. And, if two gangs can somehow meet halfway on something, it isn’t irregular for someone to break that vow out of pride, not for a villain named Blackheart. Everything in this issue was on point for me. Sam’s motives are clear and Barnes did a great job with his narration. This is a scarred man. A tough and resilient man too, but scarred nonetheless. Falcon continues to be tested even not as Captain America. He finally got people to listen to him, see his side of things, and chaos still managed to show its ugly face. It’s hard to watch, but cities are struggling now, in our world, and there’s no Falcon’s to help. All we have out there are corrupt politicians and a few good police, with the rest content on treating black men and women like savages. This is a promising start though to this comic. If the social/racial tones keep up and the development of Sam and Rayshuan continues the way it’s been established, Marvel has a heavy hitter on their hands. Barnes did a great job continuing Sam Wilson’s journey. It feels as if he never took off the red, white, and blue.  This issue for me, is an easy 5/5

Enjoy the review? Share it, talk about it, and read this comic if you didn’t this week. Follow @peaceloveandcomics for more updates on future reviews from me. I’ll be sticking in it for the long haul on this series. Next up from me, I go in a different direction. I continue to review the crazy series, Mister Miracle. Until next time!

One thought on “Falcon #1 Review”